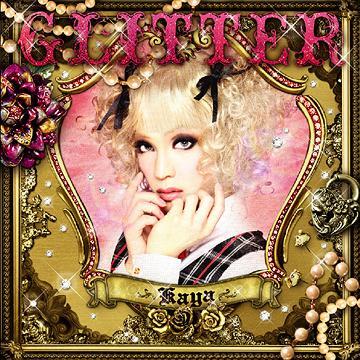 Before I provide my review for 2008’s “Glitter,” let me first give you a brief background concerning Kaya, the album’s dazzling cross-dressing diva. Once a frontman for the darkwave glam band Schwarz Stein (and a close partner with Mana, a former member of Malice Mizer and Moi dix Mois), Kaya made a name for himself within Japan’s visual kei scene, a movement where style and substance are in constant battle with each other.

After Schwarz disbanded, he made his grand entrance into the pop mainstream with his confectionary hit single “Chocolat.” “Glitter” is, of course, his debut LP, and as a fan I can say for certain that the music here is irresistable. Despite the fact that all the songs’ lyrics are in Japanese, this album can definitely appeal to American fans longing for something a little different in their CD collection.

“Glitter’s” electro-aristocratic atmosphere has quite a few surprises for one’s eager ears. Tracks like the vampiric “Carmilla,” the scandalous-sounding “Paradise Lost,” and the erotic “Rose Jail” juxtapose dreamy ballroom trance pop with harpsicords and plucked cello strings. “Walkure,” “Epicurean,” and “Glitter Arch” all deliver heart-thumping techno club beats. “Funerary Dream,” with its reverberating piano keys, is an infectious starlight melody that swims through a glass of absinthe. “Psycho Butterfly” can best be decribed as a sparkling retro-musical box of synth diamond disco. The high-flying “Kasha” is an injection of industrialized EBM adrenaline. Perhaps my two most favorite songs on “Glitter” are “Silvery Dark,” a fantastic snowflake love ballad, and “Masquerade,” a toe-tapping burst of souped up bistro jazz made complete with a saxophone and a hammond organ. Kaya’s tenor vocal range is impressive, for you can sense the emotion behind his own themes of intimate love and self-discovery. I better not forget that among the team members responsible for arranging the orchestrations are Hora from Schwarz Stein, KALM from Velvet Eden, and Hizaki from Versailles.

If you are out looking for that special something to get for either Mother’s Day or a friend’s birthday, I can highly recommend the “Glitter” LP as a great gift for fans of breakthrough Jrock acts and 80’s new wave nostalgia. Get this CD while you can! Now one question remains: “Who is tonight’s guest?”