Formed in the sunny city of Orlando, Florida back in 1998, the band Gargamel! consists of digital keyboard loon Servobeonic Man, kumquat guitarist Professor Knuckles, drum-and-steak beater Andymas, ape bassist Crazy Hector, and straitjacketed squealer Mandaddy. The very first time I saw them was during a live show at the 2008 Spooky Empire Screamfest Convention.

Over the last couple of years, the group has gained an insane following with colorful stage shows, a whiplash of studio albums, and even the band’s own scorching brand of tabasco sauce! In addition, Gargamel! has toured with GWAR, Anthrax, Mr. Bella, and Mushroomhead (among other nationally popular rock acts). Suited for fans of foul-mouth punk and Saturday morning cartoons, this awesome 5-piece has concocted an innovative sound by borrowing mind-alterning drug riffs from the likes of Jimi Hendrix and The Red Hot Chili Peppers. As evidenced in the 2007 disc, “Fields of Happy,” Gargamel! brings to the table a Funkapunkadelic wrecking ball of angry baby bruise rock crammed into a tin can of peanut brittle.

Kicking off this Hanna barbaric assailment are the haunting roadside acoustics of “Da Devil’s Bawlz,” a mosh-pit offense tossed at the mendacious tactics used by Bible-bashing Christians. Other tracks like “We’ve Got a Sitution,” “Cold and Twitchy,” and “The Rainy Day Fun Book” unleash a gonzo gorilla batch of pulverizing nu metal with twinges of fuzzy funk and Ritalin reggae. “Pussy Teeth” is a minute and 40 seconds worth of stomping dentata thrash. “Party Weapon” is a hallucinatory, alcoholic ditty about the long-lasting effects of date rape. The warped wavy gravy of “Favorite Fiend” and the mutiliation of “Dr Ripper OBGYN” emit the potent purple haze of the psychedelic 70’s. “Too Much To Share” is a not-so-friendly radio rage tune that barfs malt liquor and corn chips onto the money-making bureaucrats in charge of the record industry. “Get Up and Go!” is a citywide killing spree lead by an army of gut-munching zombies. The 60-second instrumental titled “Eat Out My Butt” is a proctologist’s worst nightmare wiped out on some cowabunga surf. Perhaps my most favorite track on “Fields of Happy” is “Language of the Knife,” a mass murder screamer taken from the point of view of a jealous kitchen blade.

CALL ME WHEN YOU DIE! 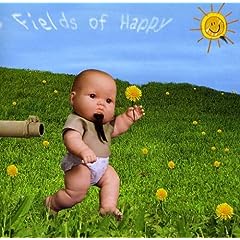