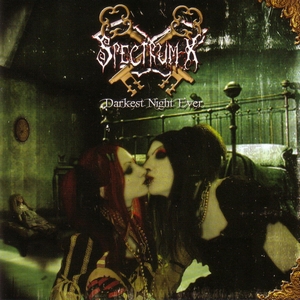 “The gnomes are coming, they want to steal your pony.
They’ll take your heart and tear it all apart!”

Formed in the year 2004, Spectrum X is an earsplitting industrial dollhouse project odiously orchestrated by Nullifer and CandyBones, a husband and wife team from Piacenza, Italy. Recently, this diabolical duo has abducted a much larger fan base of ostracized punks and lunatics by touring with cross-dressing crooner GPKISM.

Vomited in 2008 by Darkest Labyrinth (a prolific Japanese record label founded by Kiwamu, formerly of the vampire visual kei band Blood), “Darkest Night Ever” is a concept album of sorts that pours out a sludgy tea cup of electro-goth keyboards, clockwork thrash beats, and serial killer nursery rhymes. Narrated by Null’s swamp water growls, the story is set in an ordinary town on Halloween night. A bunch of costumed trick-or-treaters enter a creepy Victorian house to follow the enticing aromas of baked vanilla cookies and candies. Then, the doors shut and the children are trapped insde. From there, these little boys and girls reach the dark confines of an ancient room where the ageless, cobwebbed figures of Candy and Null come to life to present a science-fiction nightmare of war and destruction. Many moons ago, the two accidentally plunged through a magic looking glass into an alternate dimension where their alter egos, Akuma and Saralee (who together form TraumaFactor, a noisy but fun side project that even advertises its own myspace page) are soldiers chosen to fight a ultra-violent war against bio-engineered terrorists until the human population is wiped clean.