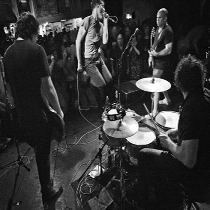 iye It’s been a while since your last gig in Italy, who has seen you live says your are amazing, would you be up for convincing those who weren’t there to come to Mezzago on November 1st?

Yes, I guess it has been nearly 12 years since our last Italian show, so we are really excited because we always have a hell of a lot of fun in Italy!! The audiences are some of the craziest in the world. We did a show at a festival in — shit, I can’t remember the town — but we played with Toy Dolls and Sham 69, and it was like 90 degrees, so hot, and the crowd was still insane!! But we still play a couple times a year, so every show is extremely special to us, and we still go crazy. So get off the fucking computer, TV, and couch and come see us!! Plus, Miss Chain & the Broken Heels are opening, and that’s cool too!

iye You haven’t released an album in a long while, the fact that you are playing live is a sign that there will be some studio recording planned?

No. Basically, ever since we “officially” broke up at the end of 2002, every year, some fun European festival asks us to play, or an old friend asks us to play a party or something. It always sounds sounds so fun, we can’t say no. So we do one festival, play a couple more shows around it, and yes, I guess that probably looks like we are still active. We are all still friends and love playing together — and I think we still put on a great show! We try to mix up the set list of songs, and maybe add a new cover song. Sam Brown, still plays drums consistently in a few bands (Divine Fits, Operators), so he has stayed really sharp too. So it’s fun to get together a couple times a year to play, hang out together, and see some old friends and new fans. And we always say if we didn’t think we could still put on a fun show, we wouldn’t do it. But no, we do not have any plans to record.
I live in Queens, NY, and the rest of the guys live in Columbus, and we’re all busy with jobs, family, etc. So it’s always great to see the guys and catch up, and it’s an amazing feeling to know we can lock right back into playing together.

iye I am aware of the fact that you probably get this often but, I am also curious about this; what was your relation with Epitaph, known for producing bands that have a different type of sound from yours?

Yeah, that was so long ago, I almost forget our stock answer for that question. Ha! But basically, Epitaph pretty much did what they said they were going to do, as far as promotion. So we can’t complain too much about how they handled us. They really did let us record however we wanted to, they never said anything about how to mix the album or do the art or anything. They were the albums we wanted to make. When we signed to Epitaph, they were trying to sign more “garage” kind of bands, like the Cramps, Gas Huffer, Zeke, and Red Aunts — and we liked all those bands, and so it seemed like they were trying to sign different kinds of things, not just the pop punk junk that we don’t really like. The people who worked there were nice, and the Epitaph European office I think really liked us too and did a great job.

iye What do the New Bomb Turks listen to when not on the road?

Well, I think we all have fairly wide taste in music. I won’t speak for all the guys, but lately I have been working as Managing Editor at a music website (www.cmj.com), and so I’ve been listening to some newer bands like Pujol, Heavy Times, Turn to Crime, Tweens, Giuda, Jail Weddings, Fa Bonx, Royal Headache, OBN IIIs, Meatbodies, and Twin Peaks. There are a few good local NYC bands I dig: The Othermen, Foster Care, Weird Womb. I love a lot of reissue records from labels like Sing Sing Records, Last Laugh, and Light in the Attic. I like that Italian band, The Snookys. But of course we all love the Dwarves, Geto Boys, Kim Fowley, Otis Redding, and Death of Samantha. And everything on Crypt Records, of course!

iye Do you have a new band that is worth listening to and you want to share with our readers?

Ha, I guess I just answered that question!

iye Has your sound evolved during the years? If yes, what is your inspiration nowadays?

I was always pretty happy with how we tried different things with our basic sound, trying to add some horns or backup vocals parts, layering guitars, etc… But of course, since we are not really a working band anymore, I think the only way we really have evolved is maybe we try slightly different speeds for some songs (depending on how drunk we might be — ha), and actually we might be better than we ever were at really blasting through sets without too many breaks between songs. We’re always inspired by just proving we can still play well together and get a crowd going. The free beers we get backstage are nice too.

iye During your career you’ve released many 7″, I understand that you too are aficionados of these records and of vinyl record generally speaking, is this correct?

Yeah, we all like buying records, and it’s fun to see that the sales of vinyl records have gone up in the U.S. in the last few years. I mean, however someone listens to music is cool with me, but it’s just more fun to pull on records and look at the sleeves while you’re listening — all that cool record shit we all love!

iye Thanks, we will see you on November 1st at Bloom! The place will be packed with fans from all over Italy, we are expecting amazing things from you!

Ha! Okay, well we will try not to disappoint!! We are playing one show in Columbus, leave the next morning, land, sleep a little, play Funtastic Dracula Carnival (which we are also really really excited about!!), fly to Italy, and play at Bloom!!! So I think we might need a lot of good Italian espresso when we get there!!