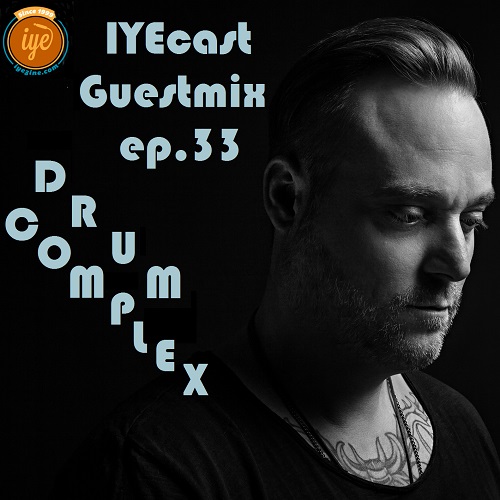 IYE: Hello and welcome on IYEzine, and thank you for collaborating with our podcast series !
DR: Hello Iyezine thanks a lot for inviting us

IYE: Your sets are always incendiary, and this mix for our podcast makes no ecception, so what feelings, emotions, energy are you trying to convey to people when you’re in a club and when you broadcast from such a platform ?
DR: I always try to play new stuff and I love to play energetic stuff. Sometimes it can be straight forward but also more melodic. The energy is the music is for me very important and I like to tranpsort this also to the audience. While performing I stay always in communication to the crowd and party with them.

IYE: You’ve just come out with your debut album, but you’re not rookies at all. How did you come to the full-length, and what kind of creative urgency did you feel ?
DR The idea to do an album we had already for years in mind but after Arnd quit working last year from his daytime job we had the time to concentrate on this big project. It was really important for us that we had the time to work on our album. It took us around 6 month nearly each day to finish it.

IYE: The album is full of massive tracks! Did you intend this project more focused on club or domestic listen, more as a trip for private listening or as a big “pick yours, there’s a wide choice” for DJ bags ?
DR: There was not that big concept behind when we started producing this album. Its more like a collection of tracks we would love to play in a club. We always try to create new stuff. Our sound is always connected to our emotions and aesthetics; I don’t know exactly how to describe it because it changes while developing it. The story of a track could be really important for me, but sometimes tracks blow me away with a simple monotonous half bar pattern.
For sure it was important for us that all stuff work in a club. That was also the reason why we did for example no ambient track on it.

IYE: I know that you’ve taken inspiration from the Japanese phylosophy “wabi-sabi” with a praise to transience and imperfection. How did you get in contact with that and how did it influence your work ?
DR: It became relevant over the last 7 years, after Arnd had a personally bad time around 2009 and saw things really negatively. A good friend of him did Reiki, which directly touched Arnd and changed his negative energy into positive thinking. For sure this helped us a lot and our career started growing up in the last years. The meaning of the album title is not only music wise, it’s more a matter of how we see things. Due to the working process on the material we were in a really positive energy.

IYE: How is it like to work among brothers ? I mean, if I worked with my brother, i think it could end in tragedy. Joking aside, how do you cooperate and divide your tasks ? I know that you Arnd take on the gigs and Daniel is more focused on studio, for example.
DR: I think it’s a really important relationship. We’ve worked hard for many many years, tried new stuff, fought against each other, and loved each other. Although we are very different characters, we complement each other very well. I usually see the big picture and Daniel is more about the small details. The splitting is not so clinical as described. All work is associated and based on each other.
Daniel played live in the beginning in the 90s and we both spent a lot of our free-time in clubs and we always stayed connected in development.
It’s more a kind of timesaver that we could work in parallel. We often spend studio-time together and work on new ideas or we just sit there and talk.

IYE: I know it’s always oversimplifying, but if I asked you to pick three artists or acts you grew up with and remain as milestones in your musical world ? And then if you’re asked to pick three artists you think may have influenced the most your music as Drumcomplex ?
DR: There were lots of great artists who inspired me and surprised me with different styles and approaches to music. To name just a few, Speedy J, Chemical Bros, Underworld, Placebo, Metallica… I wasn’t especially into a specific kind of style. I just love energetic artists and performances.
Here where I live there are a lot of local artists who told me that our music influenced them a lot, too. Roel Salemink, my partner, told me that also a couple of years ago that he was really influenced from my sound.

IYE: I see the true techno (which is often misconcepted by people’s imaginary but also by clubbers and followers too) as a music of evasion, of tension and disquietude but also catharsis, a music that breaks the walls and can raise brotherhood from the underground. May you agree with this opinion and/or what is your vision of the music you make and you listen to ? What brought you to techno ?
DR: Yes, you see it’s hard to nail, because everybody loves different issues. It could be a spark or a fire, it could be everything. For me it’s more a kind of a fragmental language of emotions and often in an androgynous garment. But it could be cold, raw and hard at the same time. Perhaps that’s my story which brought me to techno?! To communicate.

IYE: Bros, thank you very much for your mix, for this nice chat, and good luck with the album and whatever !
DR: Thank you guys for having us and we wish you all the best !