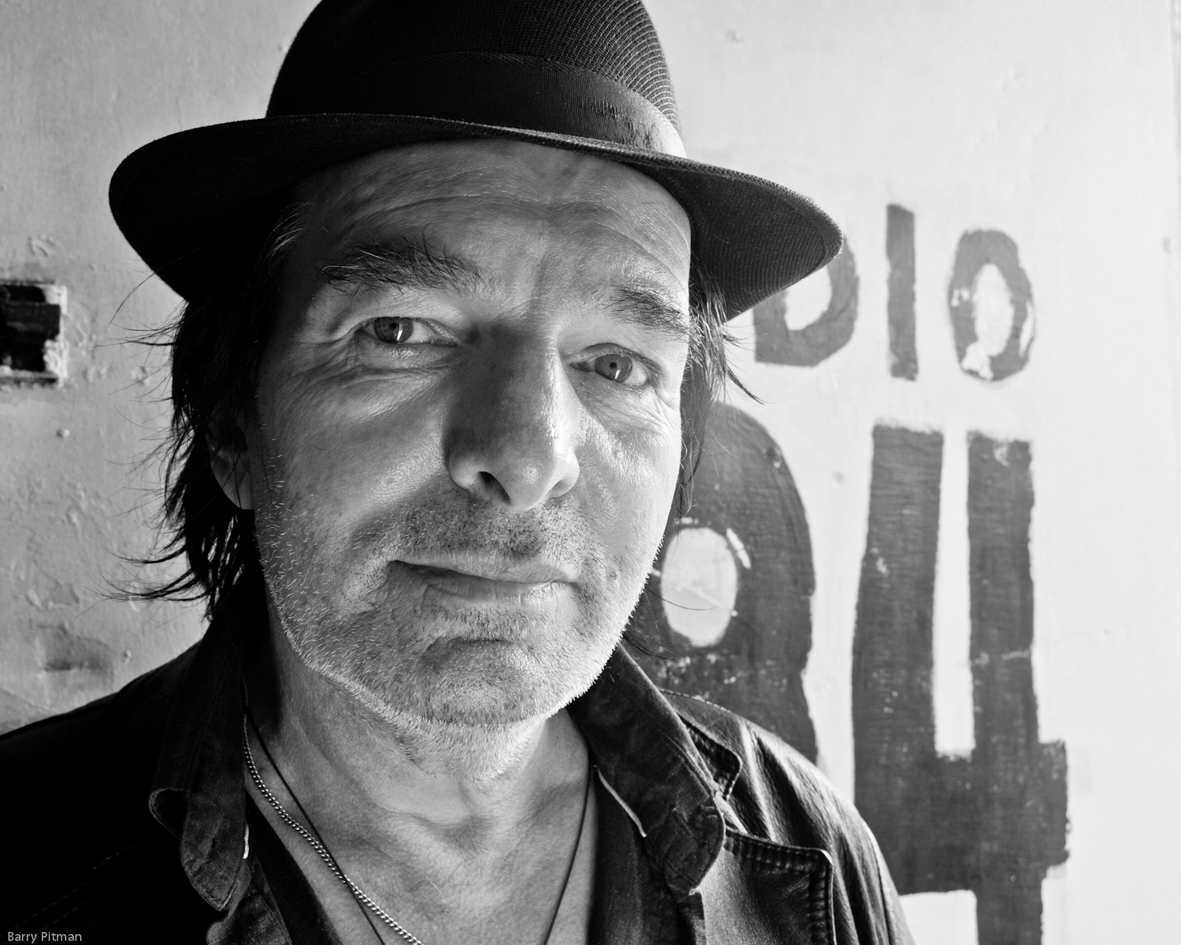 London’s guitarist and songwriter Brian James – born 1955 – was not only an absolute protagonist of the punk scene from the very beginning, but also a transversal protagonist of the entire rock scene over the last forty-five years. With an independent and flexible approach to songwriting, Brian can be defined as being ahead and at the forefront of new musical genres (think punk, goth) influencing others with his ideas and his attitude over at least a couple of generations. He wrote the first riff in the history of British punk: the disruptive and iconic riff of New Rose released in Europe with The Damned in October 1976, just a few weeks after the first single of the Ramones in the States.  After that dazzling debut and two albums with The Damned, he continued his uncompromising path playing with Iggy Pop, Stewart Copeland and other big names, touring the world with various short-lived but intense bands (for example supporting Black Sabbath with his band Tanz Der Youth).  In 1981, in full post-punk wave, together with Stiv Bators (founder and ex-vocalist of Dead Boys) and Dave Tregunna (ex Sham 69), he founded The Lords Of The New Church, his most lasting and productive group project, dedicated over a decade to a sound that oscillated between early punk and an ante-litteram dark rock. When the Lords disbanded and Bators tragically died, Brian’s career didn’t experience submissive and dull periods, although he never wanted to be put on a throne, Brian was more interested in making music and exploring various musical avenues with different players.  Today, at the age of sixty-seven, he always has that sly and rebellious look, that winking half smile of someone who has lived without sparing himself. But also the friendly and British kindness of someone who takes an interview as a chat between insiders.

IYE – Good morning Brian! I hope my English is comprehensible enough. Forgive eventual equivocal words, please! Let’s start from an anecdote, as is my habit. Many years ago, in a sandwich bar where I often burned the midnight oil with my fellows, there was a waiter who looked like you. An incredible resemblance. We dubbed this guy Brian James, of course. You already were one of our punk-age-heroes and I remember that we frequently discussed your relevance in the punk culture. You wrote New Rose, the very first punk single record in the UK. And The Damned became a fundamental and distinctive band on the punk scene. Four decades after, I ask: have you always been conscious of your role in that epochal cultural moment?

Brian – I count myself lucky to have been in the right place at the right time in the company of people with a similar attitude; this was London in late 1975 and over the next six months or so these people started forming bands and generally annoying as many people as possible and shaking things up. Someone had to be the first to get out a single and our “indie” label Stiff Records beat the straight labels and released New Rose. Luckily our producer, Nick Lowe, got a great live sound and the four members of the Damned played like their lives depended on it. From that time I’ve been known as “the guy who wrote New Rose“.

IYE – Before The Damned, you were a member of bands such as London SS and Bastard. It was a prelude phase just before punk music exploded as a social phenomenon. What can you tell us of those years and those bands?

Brian – When I started playing it was in blues bands doing covers of Bo Diddley, Chuck Berry, Muddy Waters and Howling Wolf songs and then it didn’t take long before I heard the Stooges and the MC5 from Detroit USA. Bastards was formed and after a few months was forced to move to Brussels, Belgium, in the early 1970’s as no-one would let us play in England apart from some free festivals and a brave promoter in a Hell’s Angels club who gave us a weekly residency. The kids in the French clubs of Brussels knew about Iggy, Lou Reed and the MC5 so they took to Bastard, whereas English audiences were wrapped up in Prog-Rock and the “Teeny Bop” glam scene. Ever since I can remember I’ve always played in bands or been trying to get a band together with like-minded people. Before I started The Damned with Rat, the drummer I’d played with in Bastard had put drums to my original riff that became New Rose, but once Rat played on it, he set the riff on fire.

IYE – Your path with Dave Vanian and Rat Scabies has been quite short, although a very important path. The Damned’s debut album is a perfect synthesis of what punk culture could offer to a large audience. Short shocking songs (average timing 2:30 minutes), wry and provocative lyrics, an iconic sleeve… Not only leather jackets, studded, haircrests and fuck-the-world. Your approach was goliardic, too. Punk revolution could express its power using not only a dark rage. You were a different form of anarchy.

Brian –  Like I say it’s lucky it sounds great and stands up four decades later and I ain’t been stuck with something that sounds shitty and I hate. It’s a weird and wonderful thing that musicians and artists in general should feel inspired over the last 40 years by a handful of trouble-makers with an abundance of attitude, that’s worth celebrating!

IYE – Year after year, your old fellows found a more and more grotesque style, melting dark gothic sounds with psychedelic and beat atmospheres. I defined this as “gothic pop”. Does it sound good? Even if – to tell the truth – I saw them in 1988 in Switzerland, playing as supporters for Motorhead and playing, above all, very old punk and aggressive songs of your repertoire. Dave dressed with leather trousers and a studded belt. What do you think of albums like Phantasmagoria and Anything?

Brian – After my time in the Damned I was invited to play guitar with Iggy Pop, which was a trip, a very cool trip, and then Stiv Bators and myself formed The Lords of the New Church, which was not only a lot of fun but creatively amazing to write with such an inspiring lyricist. Stiv would write pages and pages of free-form lyrics, poetry, such a fantastic imagination! There was definitely a gang mentality in the Lords. This was the 1980’s, it was us versus the world. So there was not a lot of time to check out new bands, or what the current Damned was recording.

IYE – Can we say that The Lords Of The New Church were what The Damned was not meant to be? If you’d stayed with them any longer, The Damned could have become something similar to The Lords?… It’s a insidious question, I know! But I try to imagine how The Damned could have evolved their career with their originary line-up, whilst maintaining a certain “philosophy”.

Brian – I’ve always enjoyed working with different musicians, there’s various players who bring out certain things in my playing, Rat is one of these people. The Damned was great and a lot of fun for me from late 1976 to mid 1977. Then we had a passion and attitude, without these emotions its pointless and a waste of time, I guess in a way, the Lords were what I hoped The Damned would turn into.

IYE – Can you share with us some lovely and interesting memories about Stiv Bators? He still got many fans, here in Italy.

Brian –  Stiv was a wild performer but also one of the funniest people I’ve ever had the pleasure to know. A born practical joker, something he got from his father. His parents were very cool people who’d always come to Lords gigs in Cleveland and New York. Stiv’s background was very similar to my own, working in factories and stuff when we left school and listening to early Rolling Stones and Pretty Things, plus he would turn me on to obscure American bands and likewise I’d turn him on to English bands. IYE – Twenty years ago you worked on a project called The Racketeers, together with Stewart Copeland, Duff McKagan and Clem Burke. An amazing ensemble for a lot of people who grew up in the ’80s. Your artistic life has been so varied and unpredictable. You’ve played with many other protagonists from the international rock scene. This is a funny and positive way to reach a complete experience as musician, I believe.

Brian – As I mentioned before I’ve always enjoyed playing with various and different musicians and I suppose the epitome of this was a band I formed with MC5 guitarist Wayne Kramer where I invited old friends Stewart Copeland and Clem Burke on drums and Duff McKagan on Bass to record an album called Mad For The Racket. This was fun so we did a bunch of gigs with Mani from Stone Roses standing in on bass as Duff had other commitments.

IYE – I can see that you never stop. Anyway, after this long and strong career, what’s in the pot for your future?

Brian – Since then I’ve been releasing solo albums on Easy Action Records and I’m currently half way through a new one and have been talked into writing my autobiography which is going to be called The Bleeding Book for release hopefully in 2023. Thanks for inviting me to participate in your magazine, Deca. And I wish you good health and happiness in the future.

More widely known for his moniker Deca (with which he signed the most part of his discography), Federico De Caroli is a composer of electronic music, ambient music, soundtracks. Involved in various contexts and artistic projects, he writes and performs music for the italian national TV broadcast (RAI), for theatre productions, for multimedia. He works as a sound producer and a sound designer, too. His early vinyl albums have become high-value items for collectors. While remaining basically an independent musician, today part of his catalogue is distributed around the world by relevant label as KPM, EMI, APM. He has made the oneiric dimension the keystone of his personal and artistic life.