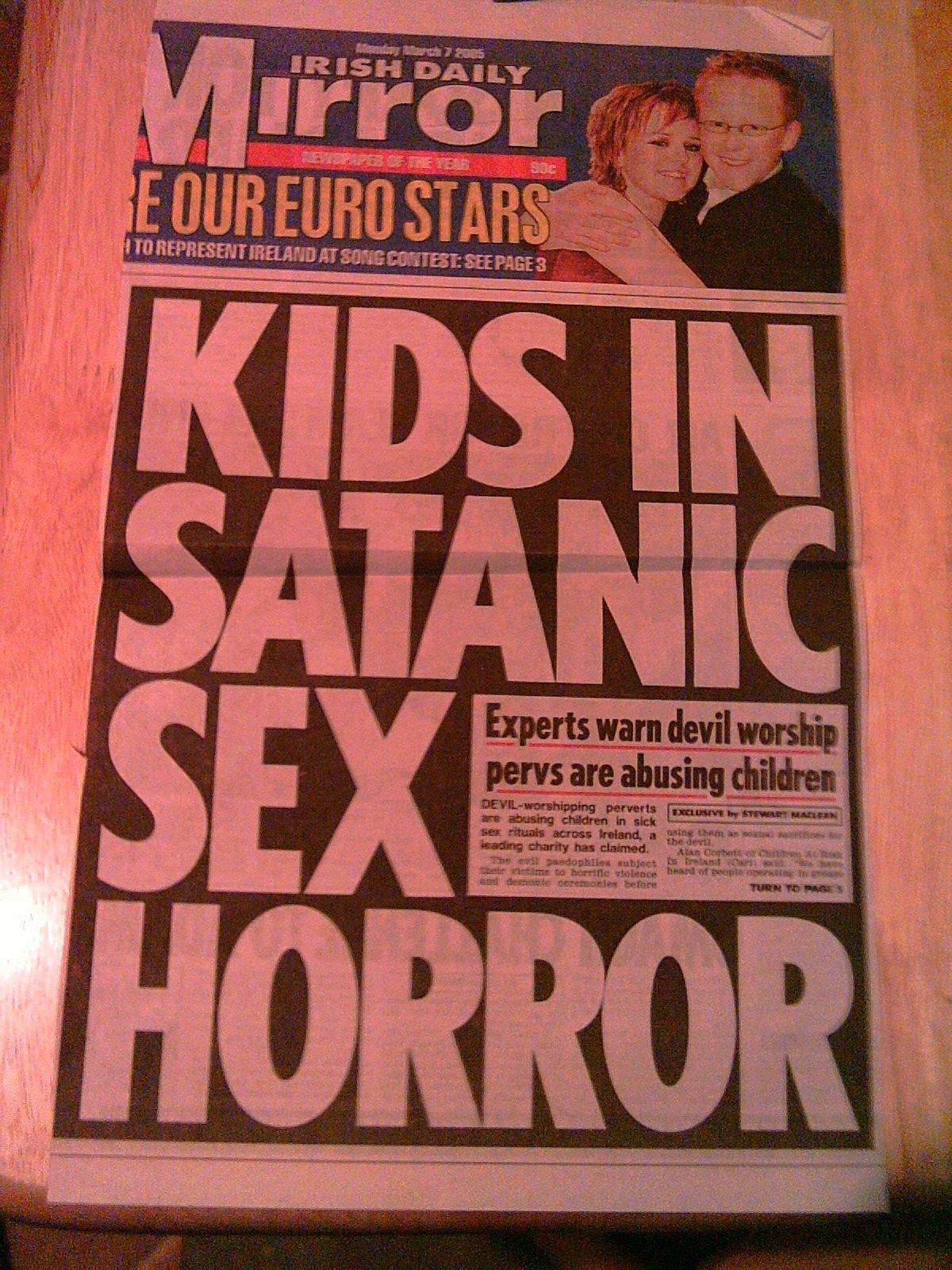 Satanic Panic Punk rock, Metal and Dungeon’s and Dragons. Fuck stranger things. The bigger thing is trolling my childhood for entertainment. We were the fucking weirdos playing this shit at school every day. Where were you fucks when being a nerd was not cool. Your nostalgia grab for dopamine is bull shit. NEEEEEEEEEEEEEEERRRRRRRRRDDDDDD DDSSSSSSSSSS I lived through this. I remember when punk and metal had a dangerous quality. It was a Mass Nerder – Descendents In the Garage – Weezer counter-culture with razor blades. We are not going to be your kinds of kiddies.

It began with the Manson family drumming up the conservative base with anti-religious rhetoric. They are NOT your neighbor’s those loose women and bearded violent hippies. They pulled the Witchcraft card all the way from back in Salem. The hype was built to degrade the first social rebellion. MAKE LOVE, not WAR. Don’t have any sort of introspection or self-reflection and actualization. Look at the blood on the walls. Charlie Don’t Surf.

Motörhead – “Nightmare/The Dreamtime” This is also known as Backmasking. They were hearing what they wanted to hear. They wanted to hear satanic messages that were not there. Famous ACTUAL backmasking was on the Beatles “Rubber Soul”.

Next enters the meanest pant-suit wearing bitch. Tipper Gore and the Parental Music Resource Center. There was a SENATE hearing about this bullshit. You may remember the aftermath. PARENTAL ADVISORY EXPLICIT CONTENT.

In my opinion that just added to the danger and gave albums real street credit if you can piss off the Mothers Against Drunk Driving.

The British really made a mark when they had their own BANNED LIST. This was Also known as the Video Nasties. Classics such as Dawn of the Dead, Christmas Evil and SCANNERS! All this shit really makes my head explode daily. frank zappa mothers of prevention

This is all governmental social engineering. Wow, I even sound crazy to myself. Here is your proof. We know about these southern Kangaroo Courts. These are the kind of courts that convicted the West Memphis 3. Parental Advisory Stickers, Clothes you could not wear, and how you were evil if you were not a WASP. White Anglo Saxon Protestant.

There is proof that the CIA tested drugs on unknowing people. They would dose unsuspecting people, “johns” in a network of CIA safe houses. It’s an interesting read. Mind control and creating real-life Manchurian Candidates. https://en.wikipedia.org/wiki/Operation_ Midnight_Climax Here is the proof that the CIA gave Charles Manson LSD to drug people.

This is an amazing novel. CHAOS: Charles Manson, the CIA and the Secret History of the Sixties.

The right likes to think they are the radical anti-establishment group of rebels. They are just being played by this government social engineering. Here is the history. And Google MK Ultra if you don’t know the straight dope.

So. Fuck you Duffer Brothers. Stealing my culture and selling it to the masses. Long Live Damien Echols Jessie Misskelley Jr. to Jason Baldwin. THEY ARE YOUR EDDIES. They were on Death Row and incarcerated for life. Latest News:

Jessie Misskelley was tortured and gave a “confession” under duress and they were convicted with NO EVIDENCE!!! Justin Baldwin condenses the trial and aftermath into one sentence. “20 years ago I was arrested and sentenced to life in jail for liking heavy metal”.

Trust your government. “I pledge allegiance to my Flag and to the Republic for which it stands, one nation, indivisible, with liberty and justice for all.” My head hangs heavy for the true victims. I set out to look into a ridiculous funny idea that the Satanic Panic was. They have the Authority to Kill a Minority. I am not comparing the horrible truth about the treatment of Blacks and other racial minorities in the same DEGREE as the West Memphis 3. Other is OTHER. Different is dangerous.

They were actually doing it to us. MK Ultra and conservative republican evangelical propaganda. Unfortunately, as a writer often does.

I found the truth.

That did not make for as funny as an article as I intended.